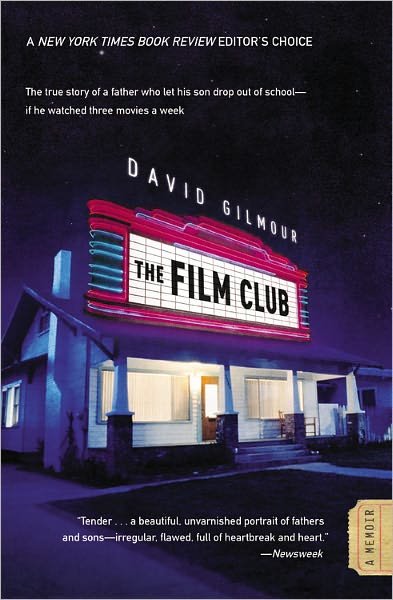 "I loved David Gilmour's sleek, potent little memoir, The Film Club. It's so, so wise in the ways of fathers and sons, of movies and movie-goers, of love and loss."
--- Richard Russo, Pulitzer Prize winning author of Empire Falls

"If all sons had dads like David Gilmour, then Oedipus would be a forgotten legend and Father's Day would be a worldwide film festival."

--Sean Wilsey, author of Oh the Glory of It All

"David Gilmour is a very unlikely moral guidance counselor: he's broke, more or less unemployed and has two children by two different women. Yet when it looks as though his teenage son is about to go off the rails, he reaches out to him through the only subject he knows anything about: the movies. The result is an object lesson in how fathers should talk to their sons." --Toby Young, author of How to Lose Friends & Alienate People

At the start of this brilliantly unconventional family memoir, David Gilmour is an unemployed movie critic trying to convince his fifteen-year-old son Jesse to do his homework. When he realizes Jesse is beginning to view learning as a loathsome chore, he offers his son an unconventional deal: Jesse could drop out of school, not work, not pay rent - but he must watch three movies a week of his father's choosing.

Week by week, side by side, father and son watched everything from True Romance to Rosemary's Baby to Showgirls, and films by Akira Kurosawa, Martin Scorsese, Brian DePalma, Billy Wilder, among others. The movies got them talking about Jesse's life and his own romantic dramas, with mercurial girlfriends, heart-wrenching breakups, and the kind of obsessive yearning usually seen only in movies.

Through their film club, father and son discussed girls, music, work, drugs, money, love, and friendship - and their own lives changed in surprising ways.