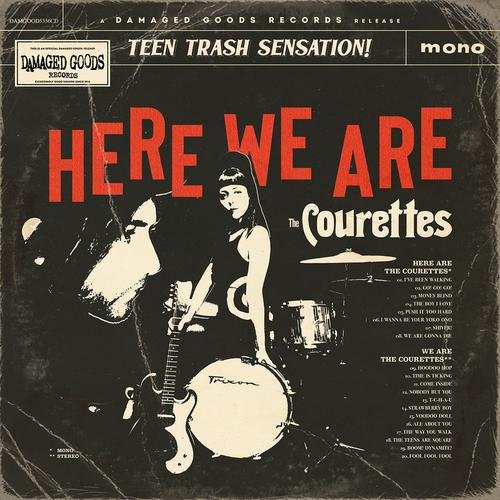 Here We Are the Courettes Signed edition

Here We Are the Courettes Signed edition

The Courettes' first two albums remastered and reissued on a 2-on-1 CD!

The Courettes´ debut album from 2015. Recorded in only two days by Kim Kix from the iconic PowerSolo in a small, cramped studio in Denmark. Unpolished tunes - fresh, raw and alive tunes - and the garage is shaking! Minimal overdubs, no editing, no auto tune, no bullshit. Punk straight out of the garage and a lot of riot grrrl charisma.

Mixed by Kim Kix and Nikolaj Heyman. The album features eight original songs all in Mono. Now its reissued with a new sleeve, coloured vinyl and new mastering making it sound better and louder than ever!

The Courettes´ 2nd album was produced by PowerSolos Kim Kix with Nikolaj Heyman as engineer in 2018. This album goes deeper in its songwriting showing The Courettes´ love for '60s Girl Groups like The Ronettes and Shangri-Las. Fuzzy wild sounds are there, loud as hell drumming also, but some additional elements were added to their garage recipe: soul ballads and a handful of '60s girlie pop. Sonic quality is now stereo and overdubs like organ, piano and backing vocals were allowed all performed by The Courettes themselves, of course! Including 'Boom! Dynamite!', 'Time is Ticking' and 'Voodoo Doll' (featuring horror movie legend Coffin Joe).

Mais ofertas: The Courettes - Back In Mono (Signed)