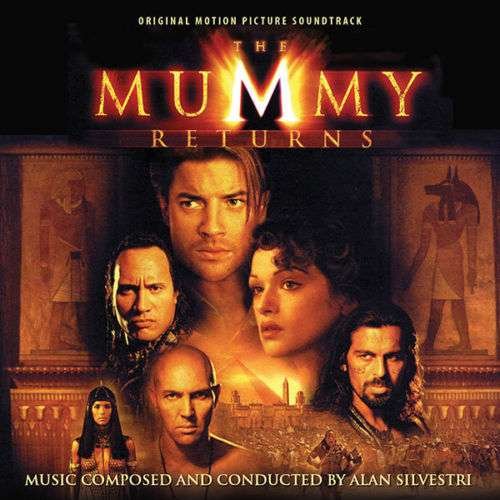 Massive Alan Silvestri score gets lavish 2-cd treatment! Stephen Sommers follows his 1999 blockbuster with even bigger event, bringing back Brendan Fraser in the lead, Rachel Weisz, John Hannah in support. Patricia Velasquez proves worthy opponent for Weisz while Dwayne Johnson makes his major film debut as "The Scorpion King", soon to have an entire spinoff for himself. Think starpower! Expanding on adventures from 1999's The Mummy, archaeologist Fraser now finds himself embroiled in spectacular sword fights, battles hanging from dirigibles, desert warfare, screaming pygmy attacks, combat with the titular character... and of course dueling with "the Scorpion King". Returning in larger roles are those noble Medjai Commanders, led by dashing Oded Fehr. In fact, one of composer Silvestri's highlights is the sweeping, richly harmonized major-key theme for those heroic horse-mounted fighters. Swords flash to major chords galore! Following in path forged by Jerry Goldsmith for initial 1999 movie, Silvestri writes to gigantic scale of Universal's part-Lawrence of Arabia, part-The Sea Hawk, part-The Ten Commandments, part-Indiana Jones and part the proverbial kitchen sink. And how it does work! Silvestri nods to all of the above with his huge 100-piece orchestra and 60-voice chorus, recorded in London. Silvestri enjoys telling of the joy in recording all of the musicians together rather than with the customary separate groups recording at separate sessions. The majestic sound achieved becomes one of his personal favorite scoring experiences! Besides the Medjai theme, numerous other themes appear, including not one but two rousing themes associated with Fraser's spirited adventures. Love themes, sinister ideas and an aggressive orchestral/choral rhythmic theme for evil Velasquez and a sinuous English horn theme for the Scorpion Kind also get moments front and center. All total, Silvestri records some 112 minutes of score, plus an additional 35 minutes of alternates to accommodate changes during film editing, making it one of his largest projects ever! Decca released a soundtrack cd of highlights but due to timing of 2001 album release in stores, they necessarily had to drop large portions of the score that had not yet been mixed, including every single cue scored for the climactic action sequences, totaling some 25 minutes alone! All of it is premiered here in Intrada's 2-cd set for the first time, courtesy of Universal Pictures and Universal Music Group! Included amongst many such highlights are the epic-scale climactic battle cues, final dirigible action sequence and the powerhouse fanfare-coda that finds the film's actual title card finally unfolding climactically across the screen, brass triumphant! And if all that wrap-up isn't musical spectacle enough, the first-ever release of the magnificent end credit music also premieres, using several key themes before landing on the Medjai theme in dynamic manner and unwinding in its own majestic array of brilliant fortissimo brass! Literally a masterpiece of classic-style film music! Flipper-style booklet design by Kay Marshall, literate notes by Tim Grieving further enhance the dramatic package. Alan Silvestri produces, composes, conducts the Sinfonia of London Orchestra and Chorus.