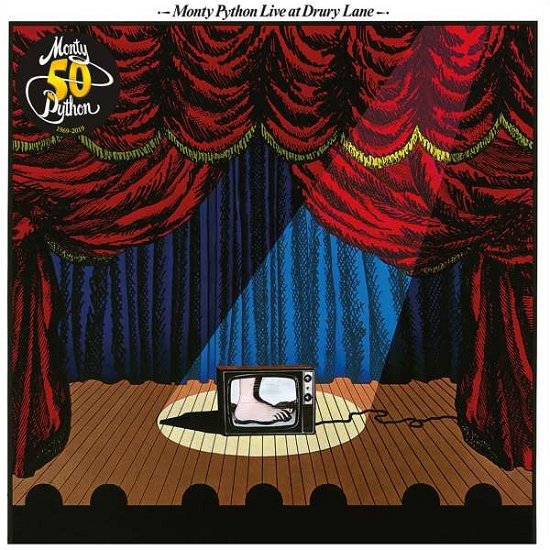 By the time the seven young boys and a girl took to the boards of the Theatre Royal, Drury Lane in London's glittering West End, they had been performing on stage together, on and off, for all of three years. And for the live shows, the Monty Python team did indeed swell to acknowledge seven young boys and a girl. Neil Innes and Carol Cleveland, those loyal Python props (in the sense of one who supports or assists) were allowed to shine in their own right.

'Monty Python's First Farewell Tour' took the United Kingdom by storm in the Spring of 1973 and then invaded Canada that Summer, before returning triumphantly to London for the Drury Lane shows. The planned run of two weeks was hastily extended to the month of March, 1974. The show was even given the Royal seal of approval, Python-style at least. The Royal box was always occupied by a dummy Princess Margaret.

For Terry Jones: "it was the nearest that any of us ever got to having a proper job. We would kiss our wives goodbye, work the night shift in the theatre, get roaring drunk afterwards, roll home and then do it all over again the following day".

This recording captures the very last night of the run. It is a particularly vocal audience enjoying the well-oiled machine of sketch comedy. Classics like Nudge, Nudge and The Argument Clinic are greeted like old, familiar friends. That's precisely what they were. There are few concessions to the recorded medium, although Charisma boss Tony Stratton-Smith does get a name-check in the Election Special sketch. As does James Gilbert, then the Head of Comedy at the BBC. Things had clearly changed though. Although six episodes of 'Monty Python' would be broadcast by the Corporation in the Autumn of 1974, the team had matured via both repetitive live performances of the sketches and the freedom that Charisma Records had given them. There was a real sense of the Pythons finally owning their creative integrity.

The Drury Lane audience may also have been surprised to see Eric performing the Lumberjack Song. As Michael Palin explains: "Although I had sung it in the television sketch, Eric sang it in the live shows. The plaid shirt and suspenders suited both of us!" Charisma Records considered releasing a commercial single of this version but, as Mike says: "George Harrison came on board to produce a new single of 'Lumberjack' and wanted me to sing it. Eric was perfectly fine about that".

For all this fresh silliness, there's a pleasing irony to be had in Eric Idle's opening introduction, promising that: "we'll be seeing jokes, many of which are appearing for the very last time before retiring".