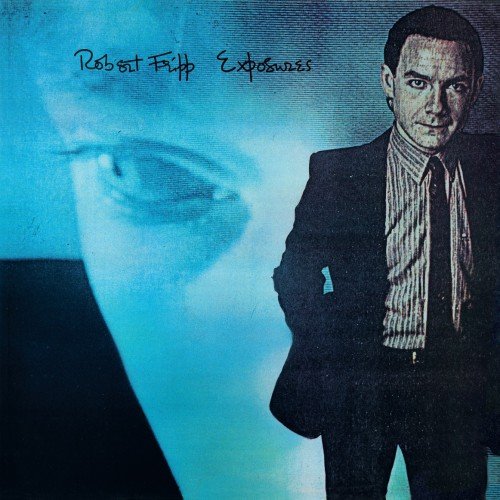 After King Crimson's dissolution in 1974, Robert Fripp embarked on a lengthy sabbatical away from the public eye. His relocation from Great Britain to New York in February 1978 marked his return as a producer, solo artist, and 'wild card' collaborator with an impressive roster of artists including Daryl Hall, Blondie, Peter Gabriel, and David Bowie. Fripp's first solo album, Exposure, was released in 1979. A further two solo records, Under Heavy Manners/God Save The Queen and Let The Power Fall followed, and in 1980 he formed The League Of Gentlemen. Described as a New Wave dance band, this led to King Crimson's reformation in 1981.

The term 'Classic album' has been devalued somewhat through overuse, but if ever an album has proved worthy of the term it's Robert Fripp's 1979 solo debut Exposure. An invitation from David Bowie and Brian Eno in July 1977 resulted in his appearance as lead guitarist on Heroes, David Bowie's 2nd 1977 album from his own golden year and marked Fripp's return to full time musician. Further work with Daryl Hall, Peter Gabriel, The Roches & Blondie (a version of "I Feel Love" sung by Debbie Harry was planned for inclusion on the album but never recorded), preceded the sessions. Recorded at the Record Plant in New York, the album was originally conceived as part of a trilogy alongside Daryl Hall's Sacred Songs and Peter Gabriel's 2nd solo album (both Fripp produced). Exposure was delayed from its scheduled 1978 release date by RCA's postponement of the release of the Hall album (that remained unissued until 1980) & Hall's then manager's insistence that some of his vocals be removed from the album. When the album finally appeared in 1979, its mixture of songs, singers, instrumentals, snatches of speech, audio verite sound collages - all linked by an autobiographical/diary approach - presented a very different musician from that of the initial King Crimson period 1969-74. Even in a period when the wheel as represented by a vinyl album seemed to be reinvented on a routine basis, a time when "expect the unexpected" was the best approach to any number of then new or current recordings, Exposure stood apart. It still does.

Discs 1 - 3 comprise some of the Major Loops for Frippertronics. Disc 3 also includes the loops for the track Breathless.

Disc 4 NYC: Exposure Master Loops and Lost in the Bush of Ghosts

Disc 4 Previously unreleased, except. Bush of Ghosts loops previously available as a download from dgmlive.com under a later title. New to disc

Disc 5 contains the original album running order/featured vocalists/original lyrics in some instances (with the original proposed album title) as mastered in August 1978, taken from the master tape and accompanied by a selection of alternate takes and rough mixes from the album sessions.

The 2006 master/running order of the First Edition of Exposure plus loops recorded for Here Comes the Flood.

The 2006 master/running order of the Third Edition of Exposure plus the additional material from that release album songs with Daryl Hall/ Terre Roche vocals, plus material from Peter Gabriel II, Daryl Halls Sacred Songs and a previously unreleased mix of Here Comes the Flood from Exposure

Disc 9 Breathless or How I Gradually Internalised The Social Reality Of Manhattan Until It Seemed To Be A Very Reasonable Way Of Life, Plus:

New masters of Frippertronics shows, including the legendary first NYC shows at The Kitchen and two shows from the tour to support the Exposure album release that included performances in restaurants, art galleries, record company offices, radios stations and record shops.

Discs 10 - 13 Previously available as downloads from dgmlive.com. New to disc

Disc 14 God Save the Queen/Under Heavy Manners 2021 remaster, Plus:

GSTQ/UHM newly mastered from the original master tapes by David Singleton. Material released on disc for the first time in many years, plus a previously unreleased track from the same sessions, a single edit of UHM and God Save the King from the 1985 Fripp/LOG CD compilation.

Previously unreleased tracks from recording sessions of the era newly mixed by Steven Wilson and compiled into the equivalent of two imaginary vinyl length albums.

Recorded just one week into the bands sole US tour. Also included are two rehearsal performances including the LOG take on Disengage.

Disc 17 Previously available as a download from dgmlive.com. New to disc.

Newly mixed from the original multi-track tapes by Steven Wilson, including several studio recordings previously heard on live releases only and alternate mixes of five tracks.

Newly mastered from the original master tapes by David Singleton and on disc for the first time in many years plus a single edit and two earlier mixes of another track titled 1984 at the time of mixing.

Recordings drawn from a series of concerts at the New York City venue (the full series appears on Blu-Ray, Disc 27). Newly mixed and mastered from the original tapes by David Singleton to produce the finest example of Frippertronics in performance.

Under Heavy Manners and Additional Material from the recording sessions

God Save the Queen

Last of the New York Heartthrobs

The League of Gentlemen

God Save the King

Discs 22 - 28 - All material new to disc in these formats, mixes, audio quality

A collection of Frippertronics that appeared as individual tracks on compilations, other albums and the DGM website assembled and mastered by Alex R. Mundy at DGM.

Two discs of recordings and elements of recordings from various points during the Exposure sessions giving an insight into the process that led to the album. Assembled and mastered by Alex R. Mundy at DGM.

Discs 30/31 - Some material previously available as downloads at dgmlive.com, most new to disc.

The League of Gentlemens autumn tour of the UK included some of the short-lived bands most energised performances. This newly mastered audience recording is one of the few recorded examples of that tour plus, tracks as recorded by the band for broadcast by John Peel on his radio show. Unusually, for such sessions, these were recorded independently and supplied as finished masters rather than the usual practice of being recorded at BBC studios.

Disc 32 - Some material previously available as a download from dgmlive.com. New to disc.