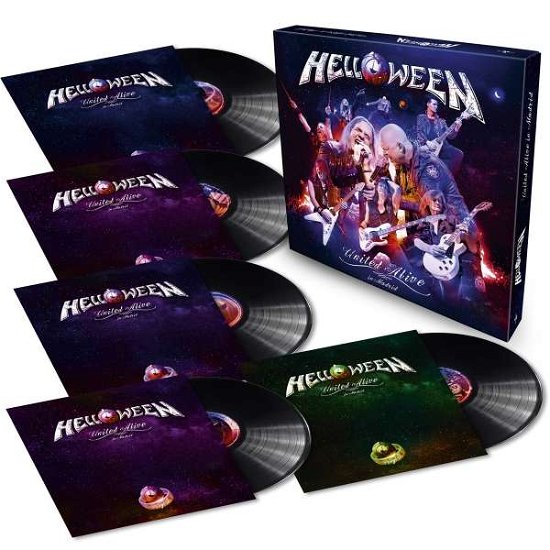 It was THE sensation of the year 2016. During the production of the 498-page "Hellbook" tribute to the pioneers of German melodic speed metal, the involved parties realized one thing over everything else: The chemistry in this band had always been unique and an exceptional band history like this simply demanded a new chapter.

What belongs together needed to be re-united : Pumpkins United. However, this birth was never just an original line-up reunion, but the real deal. The ultimate cast consisting of all 7 metal heroes: Andi Deris, Michael Kiske, Michael Weikath, Kai Hansen, Markus Grosskopf, Sascha Gerstner, and Daniel Löble. What followed, was a whoop of joy from the North German river Elbe to Rio's Sugar Loaf Mountain, and fall 2017 saw the kick-off of the unbelievable Pumpkins United World Tour in Mexico.

With the release of 'United Alive', the band presents audio and video evidence of the epic tour on DVD/Blu-ray and Live-CD/Vinyl. Every single solo, every spontaneous gesture, and every emotional encore of the Pumpkins United World Tour is captured and made immortal by hellish tracking shots, breathless close-ups, and intimate interviews.