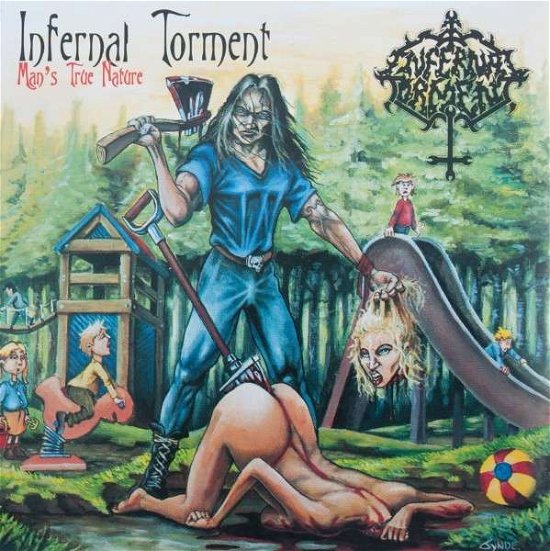 On the 25th anniversary of this dirty motherfucker of a classic death metal album, we present the ultimate vinyl reissue!

In 1995, after two well-received demos, INFERNAL TORMENT released their debut album Mans True Nature. Besides the rabid and aggressive take on death metal, the album release was marked by the countless problems the cover artworks caused the Danish band, being banned practically everywhere. Tim Lynge, promoter at now closed-down Diehard Records, who originally released the album on CD back in in 1995 recalls Calling the guys to inform about interviews, asking for tour dates etc., was like talking to angels in disguises. First, and as always, the cover which was censored in various countries was an eye opener, but the music spoke for itself. Didnt take long for fans and media to discover that. As Headfucker Magazines, Raffaella Guerini, so truly said: Hard to believe those little Beasts are so young! and hitem with yet a 10 out of 10. Youngsters who managed to create a little cute, but mature Beast. Not only impressive, BRILLIANT!

Scott Jensen, Infernal Torments vocalist and today in Dawn Of Demise, comments about the album and the artwork Back then we just wanted to play some brutal death metal and we wanted the lyrics to reflect that. I guess they turned out a bit too exaggerated/graphical. I like that. And the cover fits that concept perfectly.

Mans True Nature was recorded in the summer of 1995 at the legendary Borsing Studio with producer Jan Borsing (Illdisposed etc.), who captured the perfect brutal death metal sound Infernal Torment was looking for, deeply inspired by US bands like Suffocation. Jakob Batten, guitarist and composer, recalls from the studio session We wanted to make an album that made Cannibal Corpse look like the Pet Shop Boys. The keyword was BRUTALITY. We used a bass amp for the guitars in an attempt to make it all deeper and oompf. It was a hot summer back in 1995 and we were recording in a dark cellar with no windows, no daylight in sight. In Scotts words: Its more brutal to be pale!.

Infernal Torment went on to record and release the more melodic and complex follow-up album, Birthrate Zero in 1998, and shortly after disbanded, with key members joining bands such as Illdisposed and Dawn Of Demise. However, Mans True Nature remains one of the ugliest and most non compromising brutal albums in the history of Scandinavian death metal!