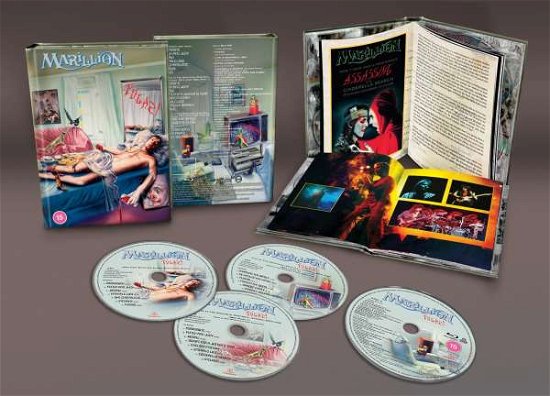 In March 1984, Marillion released their second studio album Fugazi, which went on to be certified Gold and reach number 5 in the UK albums charts. The classic album spawned two singles Assassing and Punch & Judy, both reaching #22 and #29 on the UK singles charts respectively. Fugazi was the first Marillion album to feature Ian Mosley on drums and percussion, replacing Mick Pointer after the highly successful Script For A Jester's Tear. It also included Fish, Steve Rothery, Pete Trewavas and Mark Kelly.

The CD/Blu-ray set open with brand-new 2021 remixed stereo versions by Andy Bradfield and Avril Mackintosh, who also remixed the deluxe editions of Script For A Jester's Tear and Clutching At Straws. They also include a show from The Spectrum, Montreal, Canada recorded in 1984. The performance includes fan favourites from both Fugazi and their debut album Script For A Jester's Tear in the form of tracks such as Jigsaw, Incubus, He Knows You Know, Chelsea Monday and much more. It also features a performance of the B-side Charting The Single.

The Blu-ray features 96k/24-bit versions of both the new Fugazi stereo remix and the Live at The Spectrum, Montreal, Canada concert and contains a 5.1 surround sound version of the new 2021 stereo remix of Fugazi. The Blu-ray also contains a compelling look at the fascinating story behind Fugazi in a new documentary, entitled The Performance Has Just Begun, which features all the band members talking about how the album came to fruition. This is followed by the band giving an insightful track-by-track commentary of the album, as well as the music video of Assassing with both the original and remix audio.